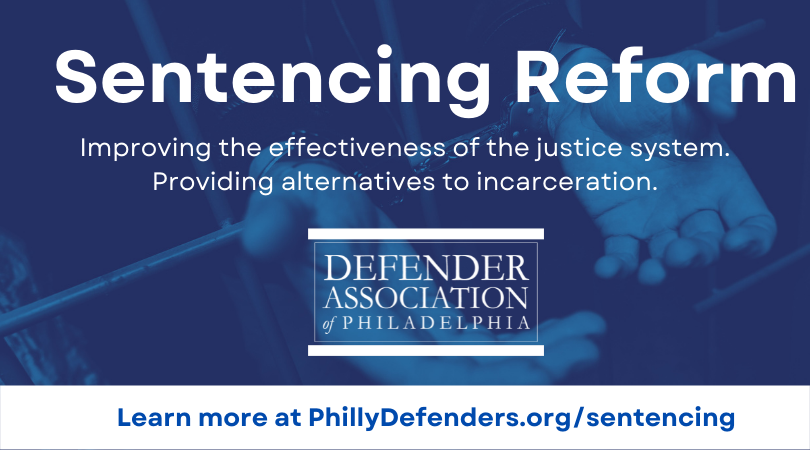 The Defender Association of Philadelphia calls for sentencing reforms that improve the effectiveness of the justice system and provide meaningful alternatives to unnecessary incarceration.

The disparity between the sentence a client receives following a guilty plea and one that is imposed following a guilty verdict is called a trial tax. The disproportionately lengthy sentence a defendant faces if they go to trial and lose rather than accepting a plea offer for a reduced sentence, is the hallmark of plea negotiations.

Because the practice is so coercive, it has both a chilling effect on trial and result in unreliable and unjust outcomes. If we want a system that is less coercive and respects the constitutional right to the presumption of innocence and trial by jury, then we should ensure that defendants have nothing to lose by asserting their innocence.

Mandatory minimum sentencing is often the stick the system uses to collect the trial tax. These refer to the laws that require judges to sentence everyone convicted certain crimes to the same sentence. These laws tie the judges’ hands and prevent them from truly considering whether that sentence is necessary for the protection of public safety or appropriate given the particular person or circumstances of the offense. They are coercive, impede a defendant’s exercise of his right to a trial by jury and lead to lengthy sentences that often perpetuate injustice.

In 2019, over 3,000 people held in state custody were serving minimum sentences of more than 20 years. Another 5,447 people were serving life without any opportunity for parole. The Defender believes that people can and do change over time and supports expanding pathways to review whether continued incarceration is necessary for the protection of public safety.

Second Look Sentencing would allow people who have served substantial portions of these lengthy sentences to petition the courts to review the sentence originally imposed and decide whether it is still appropriate. Similarly, expanding opportunities for parole provides pathways for the Parole Board to consider whether people who have served significant portions of their sentence or have severe medical conditions that limit their daily function can be safely released on community supervision.