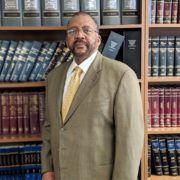 Head of the Special Defense Unit

Thurgood Matthews began his career at the Defender Association in 1981.

“I attended Howard University School of Law, where we were ‘architects for change’ – a philosophy of the professors there. Given my education and a name like Thurgood with so much history behind it – the Defender Association offered the best chance to do the work I felt I was meant to do.”

A Chester County native, Matthews welcomed the opportunity to return to the Philadelphia area to pursue a career in public defense. Throughout his nearly four decades at the Defender Association, Matthews has helped countless Philadelphians receive just outcomes in the criminal justice system.

“The Defender has long been nationally-recognized among the best public defenders’ offices in the nation, because of our training and supervision model, and our seriousness of purpose,” noted Matthews. “We have a tremendous impact on individuals’ lives – not only our clients but also their children, their parents, their communities. People come here with a humanitarian commitment, and that extends from the file room to the chief defender. We advocate for change.”

With decades of experience, Defenders often seek Matthews’ advice on difficult cases and legal questions. His colleagues say that he has the unique ability to help someone look at an issue in a different way – and find a solution.

Along with his exemplary work in the courtroom, Matthews has mentored dozens of new Defenders. Among them is Chief Defender Keir Bradford-Grey, who credits Matthews as playing a critical role in her success as a public defender. “I wouldn’t be where I am today without the benefit of Thurgood’s tutelage,” said Bradford-Grey. “I wouldn’t have had the confidence or the competence to learn in courtroom and beyond but for the time he generously gave to help me learn the craft.”

“My children grew up in the Defender family, and from an early start, I got them involved in their neighborhood,” reflected Matthews. “Keisha and her siblings have always given their time to help folks – now she’s supporting others that have no idea of the criminal justice system. No matter where her career takes her, the Defender will teach her the craft. When our attorneys go on to other places, their years of courtroom experience make them powerful advocates.”

When asked if, after 40 years as a Defender, he’d do it all over again, Matthews responded: “In a heartbeat.”