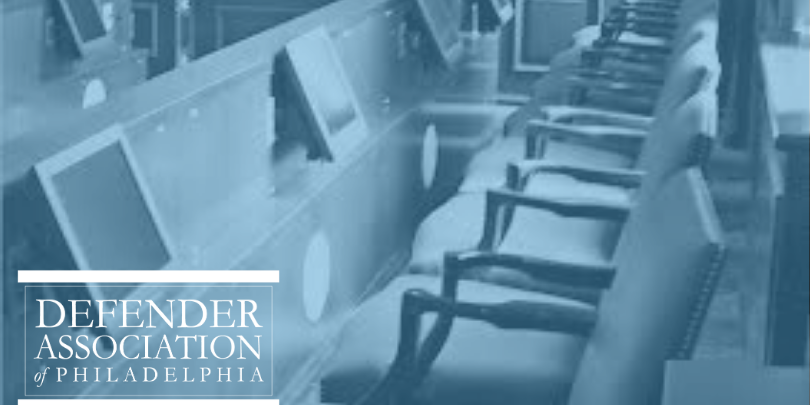 PHILADELPHIA–“The Defender Association of Philadelphia appreciates the support DA Larry Krasner has given to our ongoing efforts to move our justice system to community-based alternatives to pre-trial detention. However, the DA’s practice of ‘simulated no-cash bail’ to keep people in jail is a legal slight-0f-hand that only perpetuates the economic and racial disparities that exist in our prison population.
“The DAs office last year committed to join the Defender’s proposal to adhere to the PA law that prevents the use of cash bail for the sole purpose of detention. We agreed to develop a transparent process that would require prosecutors to ask for defendants’ bail to be revoked only after the prosecution shows by clear and convincing evidence (as the law requires) that the person is a flight risk, and/or a danger to the community. The magistrate can then exercise the option to place a high amount of cash bail or preventatively detain the person, depending on the information presented at a detention hearing. Unfortunately, the DA’s new bail policy sidesteps this process.
“The purpose of bail is to ensure one’s appearance in court and to place added emphasis on abiding by conditions of release. And, while we understand the rationale behind the DA’s ‘simulated no-cash bail’ approach, it goes against our agreement on the process and is in violation of the law, which doesn’t allow bail to be placed on individuals for the sole purpose of keeping them in jail.
“These excessively high bail amounts disproportionately impact Black and Brown defendants in our jails. We are in the midst of the COVID-19 crisis, and this practice contributes to the risk of spreading the virus in our jails while causing collateral damage to the families of the incarcerated, many of whom are already struggling with today’s new economic realities.
“This is not the type of justice reform we need. It’s time to re-think our approach to pre-trial incarceration. Our work with the Pre-entry Coalition has shown that providing community supports plays a big role in lowering recidivism. We should be expanding on the pre-entry model instead of doubling down on a system that has never served us well.
“If we want to make better decisions about people at the front end of our system, then we need to change the process by which we gather information about them.  Only then will we have a more balanced justice system–one that helps us make decisions that truly support public safety.”
# # #
Categories: Criminal Justice Reform, Featured, Legal Practice Units, Press ReleaseAugust 7, 2020

View PhillyDefenders.org in Spanish!
August 9, 2022
Join The Conversation
Our offices are closed beginning at 1 pm on Wednes