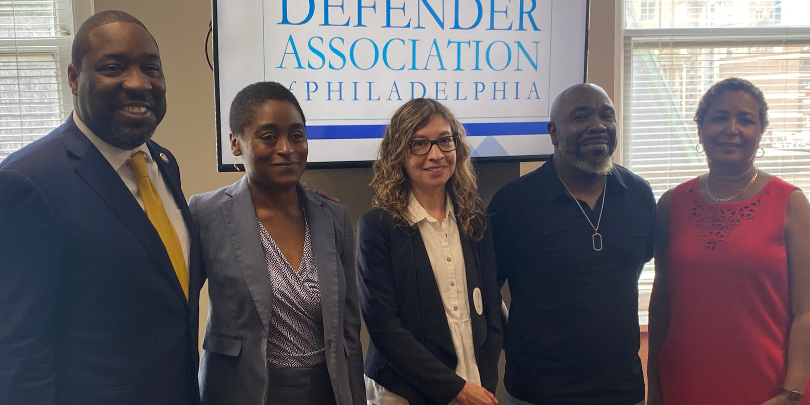 PHILADELPHIA–Chief Defender Keisha Hudson was joined today by Councilmembers Kenyatta Johnson (Second District) and Maria Quiñones-Sanchez (Seventh District) for a press conference to celebrate the Defender Association’s $5.8 million budget increase in the new City of Philadelphia’s Fiscal Year 2023 Operating Budget, which started July 1. All of the funds from the budget increase will be used to raise salaries for Defender attorneys and non-attorney staff.

“We want to take this opportunity to thank City Council, particularly Councilmembers Johnson and Quiñones-Sanchez, for making this increase a reality,” said Hudson.

Councilmember Johnson said his efforts to help secure the $5.8 million increase in funding were necessary to “guarantee a defendant’s right to effective assistance of counsel in order to increase the fairness and likelihood of justice ultimately being reached in a criminal justice system.” 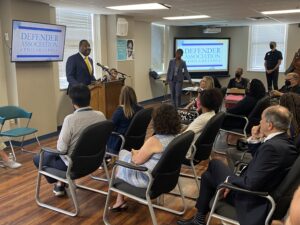 “Our public defenders experienced unprecedented challenges throughout the past few years during the COVID-19 pandemic,” Johnson continued, “They have acted as first responders and continued to advocate for their defendants while putting their own lives at risk, never resting in the defense of their clients.”

Hudson also thanked Quiñones-Sanchez for her public statements in support of increased funding for the Defender Association, saying, “Councilmember Quiñones-Sanchez was one of the leaders who publicly called for us to receive more funding at a time when advocating for defendants isn’t the most popular stance to take. But she and others understand that an unbalanced justice system is not only unfair, but ineffective at bringing meaningful public safety to our city.”

“Attorneys in the Philadelphia Public Defender’s office formed their union with the UAW to make positive changes in the office in order to better serve their clients,” she said, “The increase to the budget allows them to achieve a fair, equitable contract with living wages that will promote longevity within the office, and ultimately aid in the quality of representation for the indigent of our city. “

Legal Clerk Dharuba Cherry, who has been with the Defender Association since 1990, said the increase represents an acknowledgement of the important work done by attorneys and non-attorneys alike.

“With or without a raise, I would still be a Defender for life,” Cherry said, “But knowing that our work is appreciated by our city leaders makes me even more proud and committed to the Defender Association.”

All of the participants in today’s press conference agreed that, while the budget increase is something to celebrate, more state funding is needed to ensure that public defenders across the Commonwealth have adequate resources.

“Pennsylvania is the only state in the nation that provides zero state funding for indigent defense and that forces local governments to pick up the tab,” said Johnson, “Every year, our city operating budget should reflect important values and fight for those most in need.”