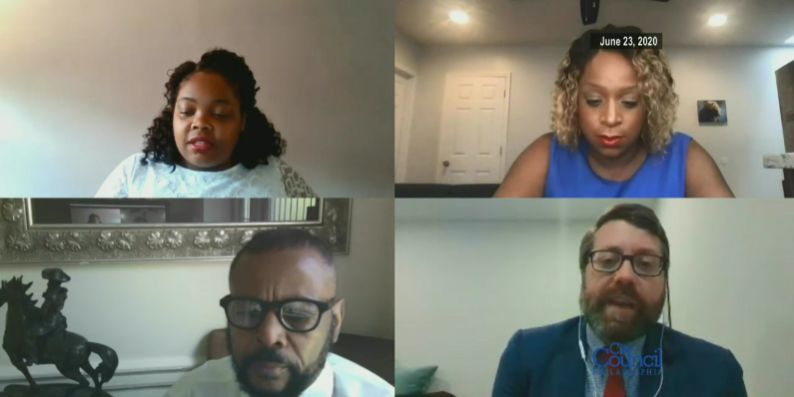 On June 23, 2020, Mike Mellon, from the Defender’s Police Accountability Unit, testified before City Council’s Public Safety Committee on issues of police accountability and transparency. The full written testimony is below.

My name is Michael Mellon and I work in the Police Accountability Unit at the Defender Association of Philadelphia where we focus on representing clients who are victims of systemic police misconduct in the City of Philadelphia.

The Defender Association of Philadelphia supports legislation for a public comment period regarding the labor contract with the police union. Police are meant to be members of the public entrusted with guarding the health and safety of the communities they serve, which entails the immense powers of arrest, detention, and deprivation of liberty – powers that no other citizen possesses.  Yet, in Philadelphia and across the country, police have become occupying forces whose procedures and policies are shrouded in secrecy and jealously guarded. This opacity has delegitimized policing in the eyes of massive swaths of the citizenry, particularly communities of color, the poor, and the young. Consequently, there is a deep, generational mistrust of the police in our city. We must redefine policing as guarding the safety of our communities with the support of the people, not despite their opposition. This requires independent, transparent oversight so that Philadelphians can feel confident that this power is not being abused.

The public comment period is but one piece of a larger accountability framework that creates a check on those who are given powers that, if abused, can trample on the human dignity and constitutional rights of those they are sworn to serve. The public needs input in any contract negotiations but they also need the power to be informed about the behavior of their police.  An informed public requires transparency in the disciplinary system from beginning to end, including a publicly accessible database that tracks disciplinary actions by officer name.  And for the public to trust that the disciplinary system is fair, the accountability system must be overseen by an independent, civilian oversight commission with a substantial budget, robust investigatory duties, and clear disciplinary powers. These last weeks have given us an unprecedentedly clear vision of both the stunning lack of accountability of the Philadelphia Police Department and how transparency and community engagement can make all the difference.

There’s yet another officer that has not been charged despite clear evidence of inexcusable assault. The officer that pulled down the masks of two kneeling people – unarmed, hands in the air – and pepper-sprayed them directly in the eyes at point-blank range. The people who were pepper-sprayed were not resisting. They did not pose a threat. The use of pepper spray in this situation is not only against Police Department policy, but it’s clearly against the law, and “following orders” is not a defense.

If that had been a regular citizen, he would have been arrested and charged with felony aggravated assault. And he would likely be in a cell. Our clients get charged much faster with much less evidence.  We know, we see it every day.

Yet, here we have all the evidence except in this case the public does not know the officer’s identity. Despite the video evidence provided by the public, and despite knowing all the officers deployed to this particular protest, the Police Department will not tell who he is. So here we are, weeks after the incident occurred on video, still waiting for the Police Department to bring charges, or at least identify this officer to the District Attorney’s Office for charging.

In the meantime, the Police Department has brought charges to the District Attorney against hundreds of people for their alleged actions during the protests. Many had no prior records. Many were young. Many were people of color. Our office has been working diligently to represent these people despite the limitations of the current pandemic. It didn’t take the Police Department any time to bring these charges to the District Attorney.

Some of these arrests required officers to investigate, obtain video, use social media, and search government records to bring charges. Clearly, the Police Department has the investigatory power and resources to find and charge the officer who pepper-sprayed protesters but is choosing not to. The Police Department is actively protecting this officer from accountability, they are not being transparent, and they cannot be trusted to do the right thing.  In short, they provide more due process protections to themselves then they do to ordinary citizens.

That’s why the investigation and discipline of officers must be independent from the Police Department and transparent to the public. For far too long, the Police Department and the FOP have been able to use the secrecy of the contract process, the disciplinary process, and the arbitration process to hide the actions of its officers from the public. The Police Department and the City constantly complain about the arbitration process, but that is just one piece of an accountability system that is broken from beginning to end.  I have read the Internal Affairs investigative procedures, and they are designed to fail. I have listened to the testimony of a superior officer who casually admitted withholding evidence from Internal Affairs but giving it to the FOP at the Police Department’s internal misconduct trial called Police Board of Inquiry – hearings that are routinely held without public access or comment.  In just the last year our unit obtained video evidence that substantiates allegations of perjury against six officers.  The Police Department has not brought charges against any of them.  I guarantee you that Bologna and this other officer are just the tip of the iceberg.

We cannot have public safety without public trust in the Police Department. To that end, the Defender Association supports the public comment period as one part of a broader strategy to reform the disciplinary and arbitration processes and hold police accountable to the communities they serve. We look forward to the opportunity to review and provide input on the next contract.

May 24: Keisha Hudson’s PA Senate Testimony
May 23, 2022
Join The Conversation
We're looking for some great people to fill #attor