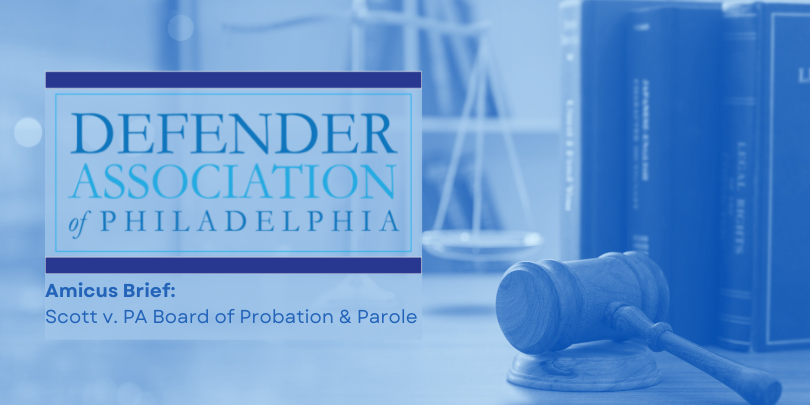 The Defender Association of Philadelphia has filed an amicus brief in support of the plaintiff in Scott v. PA Board of Probation and Parole. The lawsuit, filed in July 2020 by the Abolitionist Law Center, Amistad Law Project, and the Center for Constitutional Rights, is the first case of its kind in the country. It argues that mandatory life sentences without the possibility of parole for those who did not kill or intend to kill do not serve any legitimate governmental interest and are illegally cruel under the Pennsylvania Constitution.

The suit was brought by six people serving mandatory life without parole (LWOP). The six individuals are serving LWOP and are denied the possibility for parole due to their convictions for felony murder, even though they themselves did not kill anyone or intend to kill anyone.

The felony murder rule, which exists in forty-four states, holds a person liable for murder if the person participates in a felony that leads to a death, even if the person plays no direct role in the death or does not intend or anticipate it. In Pennsylvania, people found guilty are automatically sentenced to life, and a separate provision of state law prohibits parole eligibility for anyone serving life.

The Defender Association’s amicus brief highlights how paroled juvenile lifers, released after the U.S. Supreme Court decisions held their incarcerations to be unconstitutional, are positively contributing to the community. The Pennsylvania Supreme Court will now decide if the lawsuit may proceed.

After the U.S. Supreme Court ruled that it was unconstitutional to sentence youth to mandatory life without parole, 541 individuals serving juvenile LWOP became entitled to a new sentencing hearing, with Philadelphia  having the largest group of children (325) serving mandatory LWOP. The Defender devised a three-year plan, worked side by side with court administration, City Council, the DA’s Office, and numerous legal organizations and private firms across the region. The Defender represented 75 percent of Philadelphia’s cases and trained and supported pro bono counsel to handle the remaining 25 percent. Across the Commonwealth to date, 469 former children sentenced to LWOP have been resentenced and 248 released.